Grades have been replaced by Leagues and Divisions. Each League represents players of a certain skill area, and each League consists of varying numbers of divisions. 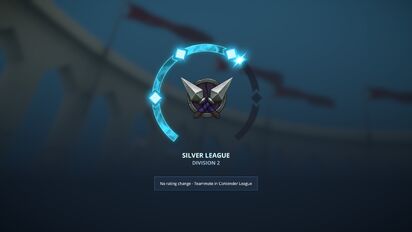 Note: If a teammate leaves the game or doesn't have a league you dont lose any points.

League is separated in 2 month seasons. At the start of a new season you get rewarded for your efforts in the last season and your rating receives a soft reset.

As you gain rating, you will move between Divisions and if you continue to win you will eventually reach the highest Division in a given League, Division 1. Progressing further will promote you to the next League. In the same manner, losing while at the bottom of Division 5 will drop you to Division 1 of the lower League.

In Grand Champion League you start gathering points instead of climbing divisions.When you lose all your points you get demoted.

You have a separate rating for each team you play with. When you start with a new team, the system tries to estimate a skill level based on your other ratings.

Players & Teams in Diamond League or above will experience rating decay if they have not played for 7 days. Play at least one match a week to avoid the penalty.

End of season rewards consist of Tokens, Chests and Avatars. The first 5 Grand Champion teams/players on each ladder also get special Titles. You can see the titles awarded and the players who received them in Titles Page.